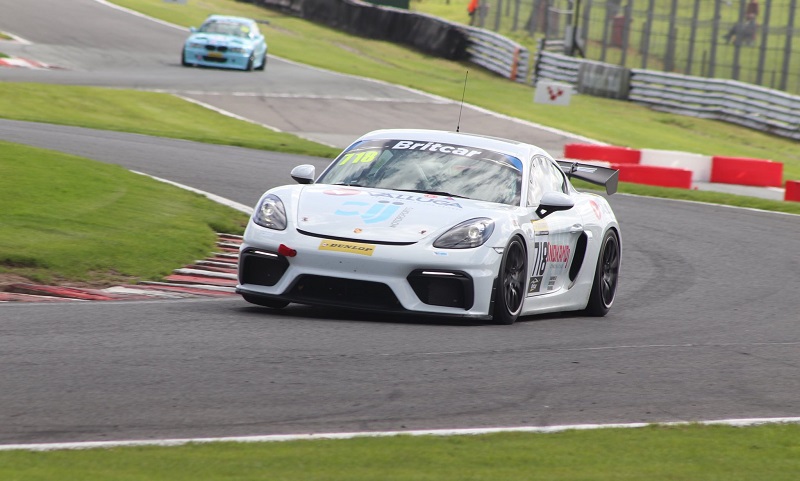 Nicole Drought took another podium finish in round five of the Britcar Endurance Championship at Oulton Park in Cheshire. Driving the CJJ Motorsport Porsche 718 GT4 alongside team mate Sean Doyle, Nicole made major steps forward as her experience continued to grow.
Arriving at the circuit second in the class championship, just a few points off the lead, the pair were determined to take a top three finish, despite the arrival of many new teams to the series at this, the fifth round. The weekend started well with the Valluga run Porsche claiming second in class in qualifying- and sixth overall.
It has been a year of “firsts” for Nicole and this time was to be her first ever time to start a GT race, as well as her first time to race at Oulton, but the Motorsport Ireland Ambassador aquitted herself admirably, holding second in class for her entire stint, before pitting to hand over to Sean Doyle. The team lost a place during the pitstop but came home third in class for another haul of championship points.

Nicole Drought, CJJ Motorsports Driver: “I’m very happy with the weekend. I visited Valluga during the week and did some work on the Simulator with Sean and (Team Principal) Benji Hetherington. I was more confident when we arrived at the circuit and this transferred into my performance. This was the first time I felt confident with the car and it showed in my lap times. If I can keep matching Sean in the car, I’ll be very happy. As ever, I would like to thank John and Suzanne Campion, without whom none of this would be possible.

Benji Hetherington, Team Principal, Valluga Racing: “A fantastic weekend. Both drivers drove really well, Nicole in particular. She drove really really well all through Friday and carried that form into Saturday. To go out there and do her first race start in a GT car… she handled everything really well and maintained a decent gap of about three seconds to P1 by the pitstop. We couldn’t ask for any more for her in terms of what the car is capable of. This weekend she turned a massive corner, having achieved the fastest lap of the car for the race, which really demonstrated that. I’m very happy and looking forward to the next race.”

This means Nicole and Sean have now regained the lead of the class championship with just four rounds to run. Their next race is at the famous Silverstone Circuit on October 10th.

About Nicole Drought:
Nicole Drought, 25, from Roscrea in Tipperary, is Ireland’s top female
racing driver. In 2016, she became the first woman to win in the Irish
Touring Car Championship, taking victory in the Production Class in her
Honda Integra. She has subsequently raced in Global GT Lights, Stryker
Sportscars and Nicole is the only Irish Ambassador for the International
Sean Edwards Foundation, with whom she tested a Porsche GT3 Supercup in Le
Castellet in 2016. In 2018 and 2019, Nicole raced in the Irish Stryker
Championship, running at the front all year with a number of podium
finishes. She is also the reigning Class 1A Endurance Trial Champion,
having taken the title in 2018 and sucessfully defending it in 2019, with
six wins from six starts. In May 2019, Nicole became the first woman to win
in the UK C1 Endurance series, when she partnered Colin Lewis to victory in
a 4 hour race at Anglesey in Wales.
In August 2019, Nicole drove a Formula 1 car at the Mondello Park Historic
Festival, when she demonstrated the ex Derek Daly March 811 for CJJ
Motorsports and in February 2020 she travelled to Palm Beach in Florida to
drive the team’s Jordan 192 F1 car.
For 2020, Nicole has joined the CJJ Motorsport team. The initiative, set up
by Irish expat John Campion, supports Nicole as she competes in the UK
Based Britcar series.
Nicole is also an Ambassador for Formula Female, the initiative set up by
Irish Hockey Star Nicci Daly to attract more females into Motorsport,
Motorsport Ireland, 20×20.ie, WISP, and the International Sean Edwards
Foundation.
Image from Michael Chester

CJJ Motorsports was founded by Irish entrepreneur and philanthropist John
Campion to provide opportunities for the next generation of Irish
motorsport talent and to continue the growth of Ireland’s racing legacy
worldwide.

CJJ Motorsports also supports a number of innovative grassroots programmes
in Ireland including Formula Female and their Go Girls Karting Initiative,
which aims to introduce 1,000 young females to motorsport via STEM
education, and the F1 in Schools Ireland programme.