Kelly does the job in Galway! With Aaron McElroy. 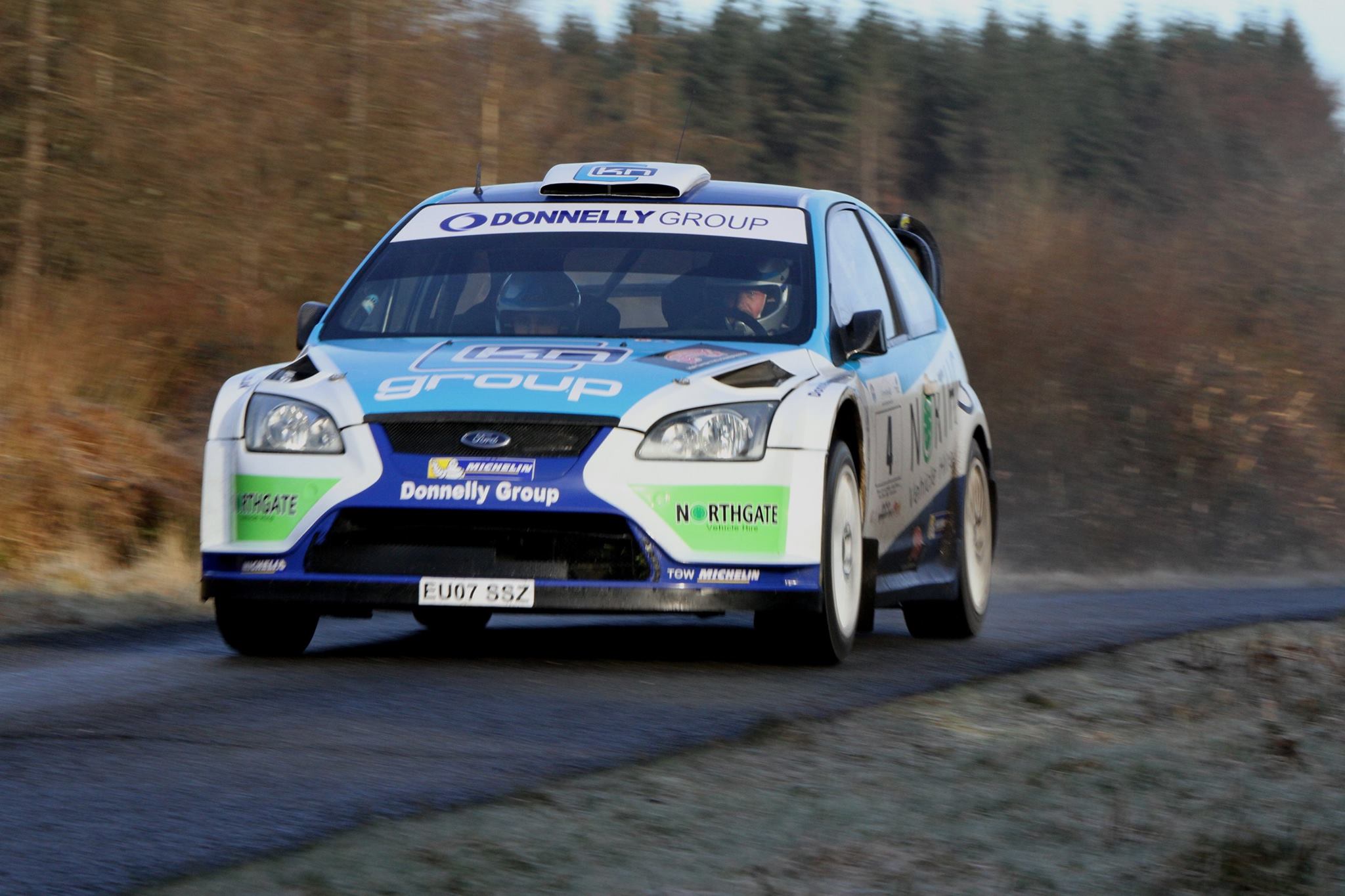 09 Feb Kelly does the job in Galway! With Aaron McElroy.

Tarmac Rally Championship off to a flying start by taking a convincing victory in the series opener,

the Colm Quinn Galway International Rally. Through the fog and ice, Kelly and Flanagan battled over

Paul Kiely in their Mini WRC.

On Friday evening, the Irish rallying world descended on Eyre Square for the ceremonial start. With

number one on his Subaru’s door and as last year’s winner, Declan Boyle led out the parade and had

his eyes on defending last year’s title. Also on the entry list was the 2013 tarmac champion Garry

Jennings in a similar Impreza. Third on the road was “The Genie” Eugene Donnelly who has an

end of Irish rallying. Donagh Kelly had number four on his Focus WRC, and behind him were the

Gallagher was the top seeded Modified driver at eight in the immaculate Starlet Rwd.

Day One got underway with a 12.8km Skehanagh test. Reigning champion Declan Boyle was six

seconds faster than Donagh Kelly, with Sam Moffett a further four seconds back. Gary Jennings was

fourth and Eugene Donnelly fifth, saying that he was on the rev limiter lots of times. Dean Raftery

struggled when his Mini went into safe mode and he was forced to limp back to service. Declan

Gallagher was best of the National section ahead of Brian Brogan, Liam Howlett and Micky Conlon –

There was no change at the top after the second test, with Declan Boyle only losing a single second

to Donagh Kelly. Garry Jennings was the big mover and found himself in third overall after the more

WRC’s. It wasn’t until the third stage that Dean Raftery regained the speed in his Mini and after

having the water pipe come loose on his car he was cautious, but it all came good when he

eventually matched and beat the time of his team mate.

bogey time, so his lead over Donagh Kelly –who also beat the bogey time on Stage five-, was less

than it could have been. The big drama on Stage five however was the news that Garry Jennings and

Rory Kennedy went off the road and retired after they hit a gravelly corner near the end of the stage.

and they were penalised for every minute that they were late into the control. This left Donagh Kelly

at the top of the leader board, thirty eight seconds ahead of Donnelly, with Sam and Josh Moffett in

third and fourth respectively. Dean Raftery continued his climb up the time sheet after early trouble

to be sixth behind the relegated Boyle, and setting times equal and sometimes better than

Declan Gallagher was the overnight leader in the National section, with a strong lead over Liam

Howlett in second. Mickey Conlon moved up to third after Brian Brogan hit transmission trouble and

fell to sixth by the end of the day. Brendan Cumiskey held first in Group N, just as he had done all

day in his newly acquired Subaru. Second was Brian O’Keefe with Aaron McHale third. In the

Historics, Ernie and Will Graham were leading over Gareth Lloyd and Gwynfor Jones, both in Escorts.

who jumped to second overall over Eugene Donnelly. All drivers found the roads hazardous and at

the end of Stage 9 they commented on how difficult it was to be brave at high speeds in dense fog.

Despite the visibility issues, Eugene Donnelly mounted an attack on Stage 9 and retook second

overall from Sam Moffett. Both Josh Moffett and Dean Raftery struggled on the roads but remained

in touch to the pack.

The nip and tuck between Donnelly and Moffett continued through Stage 10, Black Road and Stage

retained fourth overall despite a puncture and vibration being felt through the car. Declan Boyle was

in touch to the leading cars.

And that is how the rest of the day played out. Donagh Kelly cruised home ahead of Eugene Donnelly

who dogged it out with Sam Moffett all day to eventually finish second, just 0.7 seconds clear of the

Monaghan driver. Sam’s younger brother Josh was forth and closely followed by Declan Boyle who

rounded out the top six in an impressive WRC debut on a challenging rally.

Declan Gallagher led from start to finish in the National, with Mickey Conlon claiming second after

setting some very quick times in the afternoon. John Lynch rounded off the final step of the podium.

the day. Cumiskey, who had been leading for most of the rally, had to settle for second. Ernie

Graham won the Historic category from Gareth Lloyd with Joe Connelly third. In the Junior Rally,

second and Conor McCarthy and Dylan Coffey were third – all driving Honda Civics.