Life in the slow lane – from Formula Vee to the Kildare Council chamber- with Darren Scully.

07 Mar Life in the slow lane – from Formula Vee to the Kildare Council chamber- with Darren Scully.

Posted at 13:00h in Inside Line by Nicole 0 Comments
0 Likes 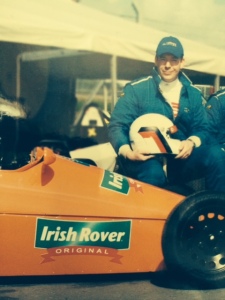 Ready to show everyone how it’s done- Darren and his Sheane at Mondello.

Motor racing and politics, what’s the difference? Well let me compare, One is ruthless, full of people who will stop at  nothing to climb the greasy pole to the top, some would do a deal with the devil and exchange their soul for a successful opportunity, and where they would gladly stab their colleague in the back whilst pretending to be their best friend, the other is politics!

When I first got involved in Irish Motorsport back in 2002, I thought I was it. The next Senna, Stewart and perhaps Fangio, Prost wouldn’t be fit to tie my laces and Vettel was still in some kindergarten with an unpleasant smell coming from his pants.

I arrived out for testing in Mondello in what I thought was a car that was designed by some kind of Doc Brown engineering genius, it looked great to me, it looked like a proper racing car, four wheels, engine, gearbox, seat with six point harness and a pointy nose, I had arrived to take over the world, surely it would only be a matter of a few short years before the call came from Maranello asking me to take over where Schumacher left off.

As I rolled the car off the trailer, Adrian Newey’s answer to formula Vee walked past.  John Mahon gave it a quick look over, stood on the front beam, jumped up and down on it a few times, stood back, looked at me and said “That 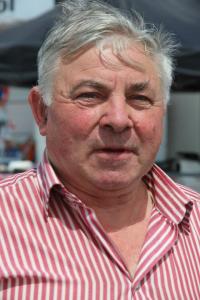 Adrian Newey has nothing on this guy- John Mahon. Image from JayTee Photographic.

would be a pig of a yoke to drive”, with that he walked on. Wow, thanks for that amazing technical insight I thought, who is that guy anyway, doesn’t look like he knows what he is talking about, I’ll show him. I got the gear on, strapped myself in and proceeded with some laps. After pounding around the National track for a good twenty minutes, I came in, got out and looked at the times. I was 14 seconds off the pace, no not 1.4 seconds, but a whole lifetime of 14 seconds. Mahon was of course right, it was a pig of a yoke to drive and he was quickly signed up as my technical consultant.

Over the next six years I had a great time, spending my hard earned wages to go round in circles and slowly but surely start climbing up the order. When qualifying for the A race was to feel like winning the Monaco Grand Prix you can see that I am easily astounded. Like many in the Formula Vee paddock, you do really get addicted to sport, stripping down engines and gearboxes under a flashlight at 10pm in a wet and windy former airfield in Kirkistown on a Friday night is not for the faint hearted. “What the Fc*k am I doing here?” often went through the head, when a young Gary Newsome would glide past you as if you were an oul one holding everyone up as you hogged the fast lane on the motorway. I never did get to smell the sweet smell of victory, but I did get to smell the inside of Naas Accident and Emergency when I auditioned for the Red Arrows by barrel rolling my trusty Vee six times out in the country in Mondello. As my loyal and adoring wife looked over me in my hospital bed she reminded me I had two kids and a mortgage and perhaps I should cop myself on and concentrate on more important things.

After a while it dawned on me Ferrari was never going to call unless they needed another Badoer, so I hung up the helmet and got on with something I equally enjoy but I am actually good at. Motorsport and Mondello are of huge importance to Kildare, it is something that I really like to champion when I attend meetings related to pushing tourism for the County. I really admire all the people who give up their weekends to marshal, manage and partake in motorsport, to many it is seen as an elitist sport, but from my experience the people who take part are just decent, hardworking, normal, everyday people, who love their sport and give it their everything. Yes it is very competitive, yes it can be extremely tough and at times heart breaking but it certainly builds character and I am all the better person for having been at one stage, part of it. Oh, by the way my best ever result was fifth in the B race during the Formula Vee festival in Mondello.

I had asked for some advice from a Wexford competitor on how best to drive the circuit after he had put it on pole, his advice was inspiring “drive her like she was stolen!”