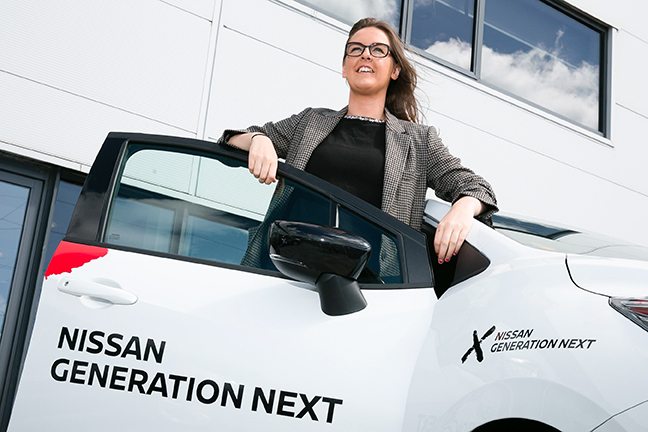 28th July 2017: Tipperary racing driver Nicole Drought had plenty of cause for celebration this week when she landed the keys to a brand new, taxed and insured car after becoming a Nissan Generation Next ambassador.

Nicole (23) from Knock Road in Roscrea fended off competition from over 1,000 applicants to secure one of  eleven places that were up for grabs on the prestigious ambassador programme which helps people to get ahead with the backing and support of Nissan.

Her success follows a three week public vote where over 100,000 votes were cast online for 20 finalists. Nicole ran an energetic campaign, receiving widespread support from family, friends and supporters throughout the county.

Each ambassador was given the choice of a brand new, taxed and insured car from Nissan’s award winning fleet to drive for a year and Nicole selected the Nissan Juke as the car best suited to helping her to get ahead.

Nicole’s goal is to become a household name and an influencer in the Irish motor trade.  She is Ireland’s premier female racing driver. She became the first woman to win in the Irish Touring Car Championship last year, which resulted in her being named as the 2016 Irish Sportswoman of the Year.

She moves to Sportscar racing this year and she has set her sights on success in the UK and Ireland in addition to completing her Accountancy and Business degree course at University Limerick. Her long term goals include testing and racing an LMP3 car in the European Le Mans Series and at the famous 24 Hour of Le Mans race.

“I am delighted to become a Nissan Generation Next ambassador and to drive away with a new Nissan Juke. My old car had 300,000 kilometres on the clock and was on its last legs. My Nissan Juke will really help me to balance life between getting to work, the gym and the race track with as little drama as possible,” she said.

“I would like to thank everyone who voted for me and I’m really looking forward to realising my goals on and off the track with Nissan’s support,” he added.

Local Nissan dealer, Donal Ryan Car Sales, backed Nicole during the voting stage and are delighted with her success.

“Nicole is an exceptional talent who shares Nissan’s commitment to excellence and innovation. We are delighted to welcome her to the Nissan Generation Next ambassador programme and to supply her with an award winning Nissan Juke so that she can continue her journey to the top of her sport,” said Eugene Ryan, Dealer Principal at local Nissan dealer, Donal Ryan Car Sales.

ABOUT NISSAN IN EUROPE

Nissan has one of the most comprehensive European presences of any overseas manufacturer, employing more than 17,000 staff across locally-based design, research & development, manufacturing, logistics and sales & marketing operations. Last year Nissan plants in the UK, Spain and Russia produced more than 660,000 vehicles including award-winning crossovers, commercial vehicles and the Nissan LEAF, the world’s most popular electric vehicle. Nissan’s Intelligent Mobility vision is designed to guide Nissan’s product and technology pipeline and this 360 degree approach to the future of mobility will anchor critical company decisions around how cars are powered, how cars are driven, and how cars integrate into society. Nissan is positioned to become the most desirable Asian brand in Europe.